Unfortunately for you (and yet fortunately for me) this is not a post about eating local ‘delicacies’ – although live octopus/dog might be happening soon, so stay tuned for THAT.  No, this is a brief post about a peculiarly violent Korean (children’s?) cartoon that I have been transfixed by for a while now. 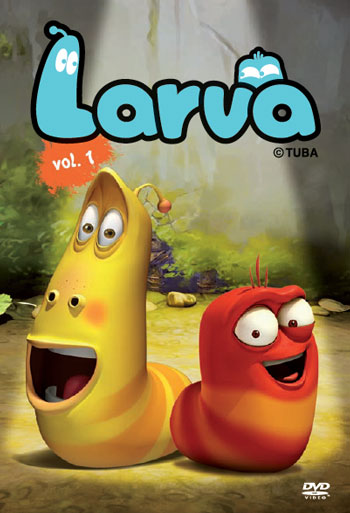 There are several types of bus in Korea (local, intercity, express etc) but all of them have seem to have the same sort of set-up when it comes to TVs.  There’s two per bus  and both display the same thing in synchrony, which is a series of about 5-10 mini-programmes that plays on a silent loop.  The series will maybe include adverts, maybe a K-pop video, maybe even a brief cookery tutorial: but what it ALWAYS includes is an episode of ‘Larva’.

Now, I’m no scholar of cartoons, the bloody recent history of South Korea or ‘Larva’, but I can tell you that there is a fairly common sort of theme to the episodes that I have seen.  We have our heroes: quite simply, they’re two larvae.  One is big, fat and yellow; the other is small, thin and red.  Eric and Ernie, Laurel and Hardy, Timon and Pumba.  These two limbless shambles live in a sewer that has a grate above it.  Each 2 minute episode hinges around a new presence in their world: maybe another creature, something that falls through the grate, or some trash that happens to be there.

From that point, there are two basic narratives:

1. The larva try to take advantage of the new item/creature in their world and suffer the consequences.

2. Someone tries to take advantage of them and again, the larva suffer the consequences.

Either way, the larvae suffer.  Here’s an example of the kind of sheer grimness that I watch on repeat approximately 5 times every time I get on a bus:

So, it’s quite funny, but also pretty macabre!  The episode starts with them trapped in a web, and maybe you might think this would prompt some sort of breakout…but no!  They just get eaten.  Other episodes have ended with the larva being hammered into the ground by a hammer made out of ants; stung repeatedly by an irate bee after stealing his honey; paralysed by a parasitic wasp, presumably so that she could lay her eggs in them; splattered by a watermelon after a skateboarding accident; and most chillingly and recently, being shot at repeatedly with grape seeds by a furious beetle, whilst hanging in the air and tied up by rope of some kind – it was basically a firing squad, children’s cartoon style.

I can’t really think of a similar kind of set-up in any Western cartoons that I have seen.  The Roadrunner cartoons are similarly hyper-violent, but as with Itchy and Scratchy, the premise is that they fight between themselves and that there is a particular dynamic to that.  However, with these two hapless Korean worms they are very much in it together till the bitter end – and it’s actually the outside world and their own terrible attempts to forge ahead that result in them experiencing perpetual doom.

As far as this being somehow indicative of Korean society goes, I just find it staggering how little hope there is for the larvae.  Arguably similar cartoons which have a recurring conclusion also lack hope – but in the case of something like the Roadrunner cartoons, do we really HOPE that Wiley Coyote eats Roadrunner?  Probably the opposite.  We want him to get blown up and run over and all the rest of it, because he is the antagonist, the ‘bad guy’.   Perhaps that’s the strange thing about ‘Larva’ – it doesn’t really have bad guys and you swiftly realise that there’s no point in cheering on the good guys.  There is only the survival of the fittest, of the biggest, of the better: and the larva are frankly rubbish.

Anyway, enough about dark Korean children’s cartoons: here’s a great song by Jorge Ben.  I first heard this song whilst perched on a very comfortable tongue-shaped chaise longue, which is probably why I like it so much.   That and it’s an absolutely awesome track.  Muito obrigado Kieranu!